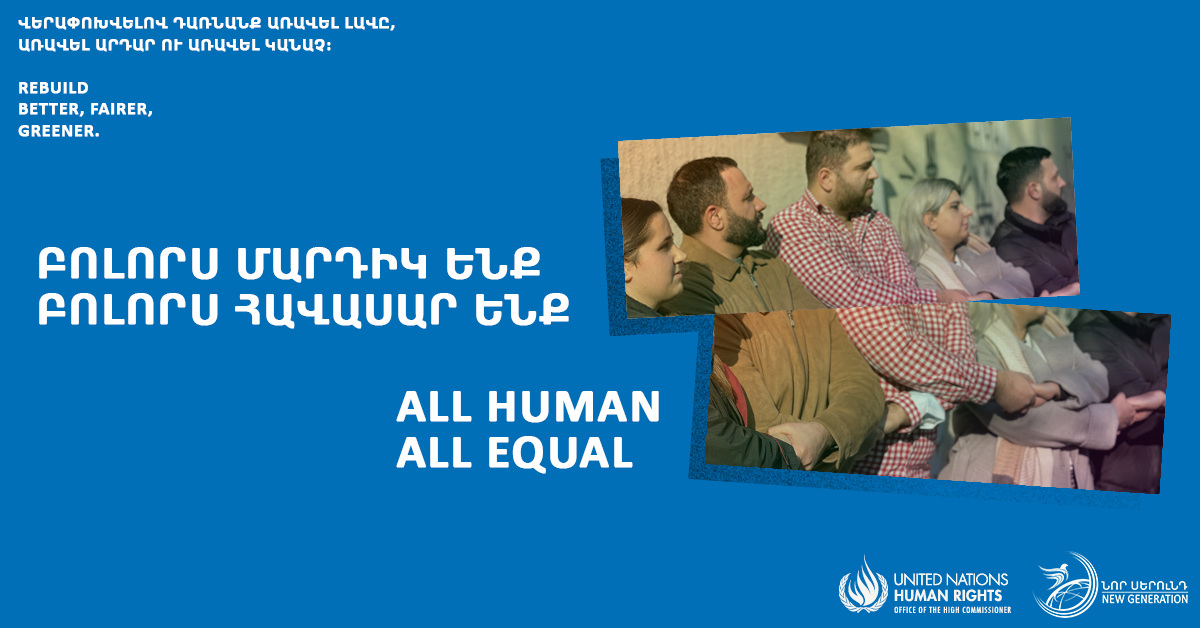 “All human beings are born free and equal

in dignity and rights. “

In 1948, with the adoption of the Universal Declaration of Human Rights, the UN recognized universal human rights standards. The Declaration is not an internationally binding legal act, but all countries of the world bear a huge moral weight that every person, regardless of nationality, place of residence, gender, sexual orientation or gender identity, national or ethnic affiliation, religion, language or position, should be treated equally and respectfully.

Every year on this day human rights defenders, representatives of state bodies of different countries summarize their work done over the past year, record the existing gaps, violations of fundamental human rights.

The staff of New Generation Humanitarian NGO, as well as other human rights defenders also sum up the achieved results and point out the existing problems and legislative gaps in Armenia. Since the beginning of its activity, New Generation Humanitarian NGO has been carrying out work humanitarian principles to contribute to the regulation of the issues and problems of the society, in particular the issues that vulnerable groups face in the society.

During the talk with lawyers, NGO staff, we touched upon the work done by the organization, the problems of human rights protection, legislative mechanisms and the human rights of representatives of vulnerable groups.

In an interview dedicated to the International Human Rights Day, Sergey Gabrielyan, president of New Generation Humanitarian NGO noted that the process of achieving the highest level of human rights protection still needs many processes. 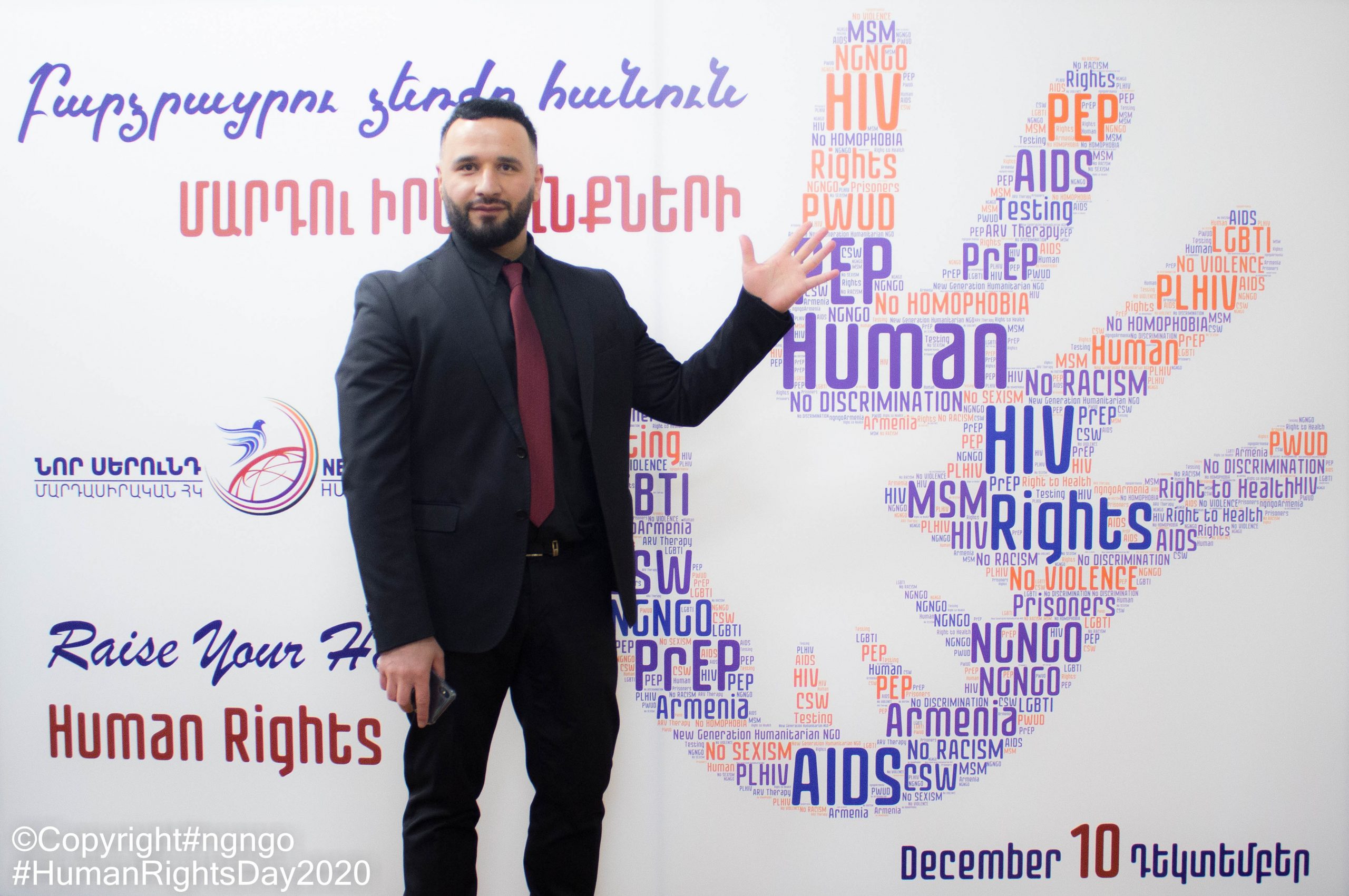 “Society is not aware of its rights as well as state obligations. Certain groups whose rights are not guaranteed by the State are in a particularly vulnerable situation. It is difficult to sum up and present everything that the LGBT community bears, but this day is another opportunity to raise the problems of LGBT people and the existing inequality, stigma and discrimination, hatred in society and to call for  peace and compassion and acceptance of diversity. I deliberately do not say tolerant because this term also contains a negative connotation, you should not just tolerate but you should fight against intolerance,” Gabrielyan says.

According to him, the activities of the NGO are aimed at achieving equality, but it doesn’t mean that someone must be separated, segregated and barriers must be established. “The rights of LGBTI people are human rights and that’s it,” he adds.

To the question, what will be the assessment of the NGOs current or planned investment in the protection of the rights of LGBTI people, he answers “We must continue to fight for the LGBTI community for them to feel safe in all spheres of life, to achieve legislative reforms through advocacy actions, to continue to protect the rights of the community in the domestic and international arenas through legal protection and advocacy.”

Speaking about the role of the International Human Rights Day, Alina Mirzoyan, Human Rights and Advocacy Coordinator of New Generation Humanitarian NGO, says that the day has a special significance. It is an opportunity to remind the society that the fullfilment of the rights and fundamental freedoms of all groups of the society is at the core of the establishment of democratic values. According to her, the protection of human rights in Armenia is at a very low level today, especially when it comes to the rights of vulnerable groups. 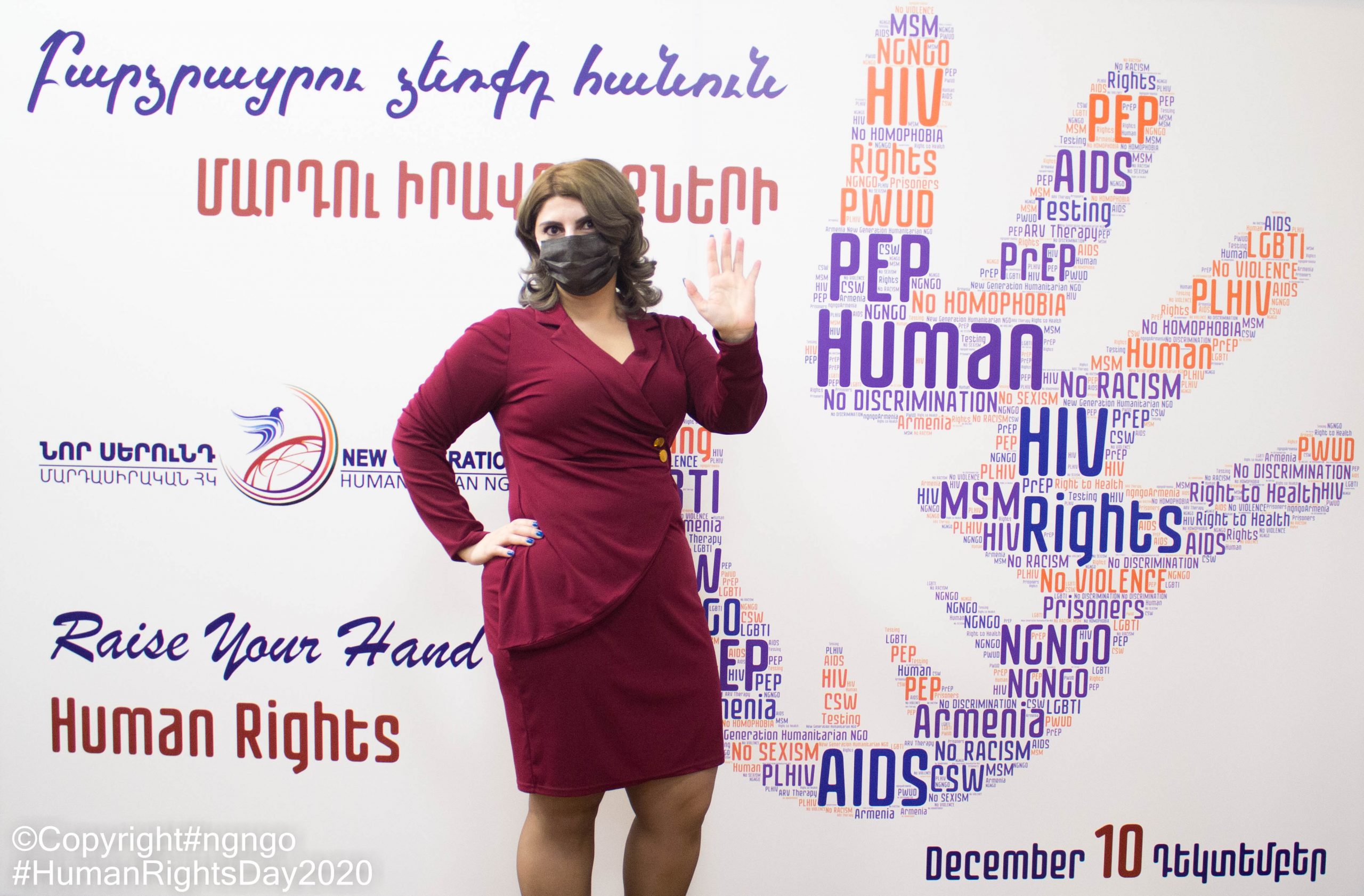 “Vulnerable groups, segregated and rejected by the Armenian society as a result of stereotypes, cannot find protection of their violated rights even in law enforcement agencies, moreover, they are even subjected to discrimination, violence and torture by the representatives of those agencies, too. One of the most vulnerable groups in Armenia is the LGBTI community, which faces stigma and discrimination in all areas of life, starting from education, employment up to the access to health care,” Alina Mirzoyan says.

During the conversation, the NGO employee touched upon the priority steps to ensure the protection of the rights of this group, the most important of which are the legislative reforms, actions aimed at constitutional changes. She mentioned that their organization currently works and advocates for the adoption of Anti-discrimination law, legal recognition of gender identity and other important legislative regulations.

“Among other important steps is to raise the awareness of the education, healthcare, law enforcement and judiciary bodies about the importance of elimination of stigma and discrimination, raising and solving the issues of vulnerable groups, especially LGBTI people, as well as of ensuring the protection of their rights, non-discrimination, friendly and non-discriminatory attitude and needs-based services”.

In this regard, the NGNGO conducts training and other awareness-raising activities among these target groups (health workers, police, penitentiaries, media representatives, and other stakeholders), however, the implementation of such educational activities at the state level will greatly enhance the effectiveness of this process.

Speaking about discrimination against LGBTI people, she stresses that it affects all areas of their lives. People in this group are often deprived of the right to education because of discrimination, pressure, and bullying in schools, which is often manifested not only by students but also by teachers. “They are stigmatized, discriminated against, abused even by their own family members and parents, often left homeless, socially disadvantaged, rejected and not accepted by even their closest people,” says Alina Mirzoyan, New Generation NGO’s Human Rights and Advocacy Coordinator.

She also mentions that the representatives of this group are not able to fully exercise their right to health due to discrimination among health care workers. They most often lack specific professional skills, for instance to conduct hormone therapy, gender affirming surgeries, and other specific medical procedures and interventions.

“LGBTI people even avoid applying to law enforcement agencies for restoration of their rights, as they can be subjected to violence and torture by the latter too, and be turned into a criminal from the victim only on the basis of their sexual orientation and gender identity,” the NGO representative adds.

For Lusine Gasparyan, the NGO lawyer, December 10 is marked by the fact that on that day, human rights are once again valued and  given a priority. “It is also the best opportunity to record human rights reforms, to raise issues, to make proposals for solutions,” the lawyer says.

However, she also singles out the existing problems and gaps, towards the solution of which the NGO works. She emphasizes that there are gaps in the protection of the rights of the vulnerable group, though the domestic legislation provides for comprehensive protection mechanisms. 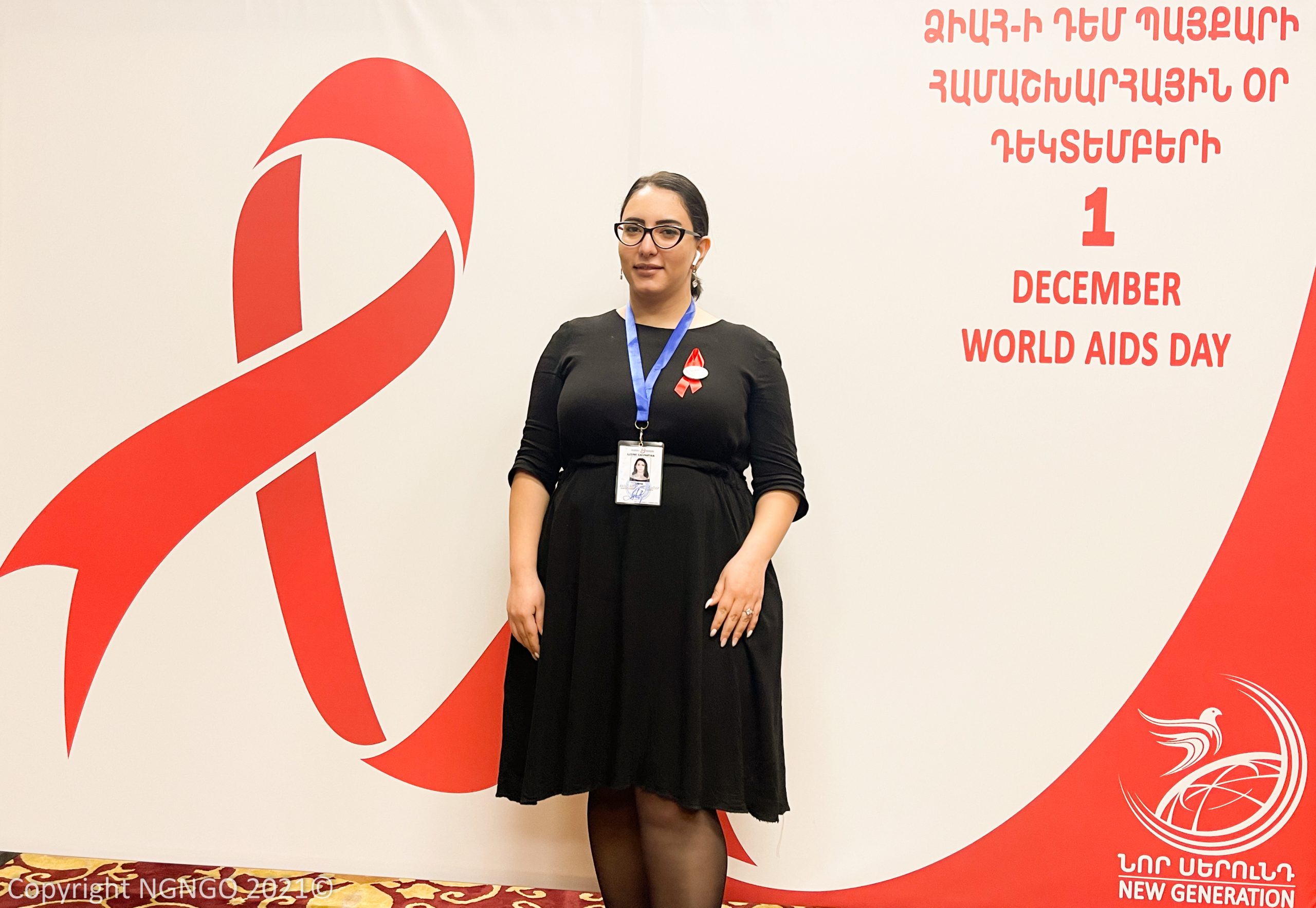 “LGBT people face discrimination and hate speech in almost all spheres of life, which lead to other human rights violations as well. Due to legislative gaps, individuals are unable to fully implement their legal protection. There is no separate, independent law on non-discrimination in the domestic legislation. In this regard, it is problematic that although the Constitution establishes the prohibition of discrimination, sexual orientation and gender identity are not included here as  protected grounds. It is necessary that effective mechanisms of legal protection are introduced into the domestic legislation of the Republic of Armenia, i.e. the adoption of a separate, independent law “On Non-Discrimination”, the inclusion of sexual orientation and gender identity as protected grounds of discrimination in the Article 29 of the Constitution of the Republic of Armenia.”

This day is special for human rights defender Hmayak Avetisyan,  as it is an opportunity to assess the achievements, understand the challenges and move forward. In response to the question how much human rights are protected in Armenia, Hmayak says,

“Armenia has taken several steps forward in terms of human rights protection, but there are still communities that face daily stigma – discrimination, hatred, violence, are subjected to hate speech and crimes.”

Hmayak singles out the LGBT community among the most discriminated groups. According to the activist, there is still much work to be done in this field, and human rights defenders should be guided by the movement for equality. According to Hmayak Avetisyan, the society treats this community negatively as a result of which they are left out of a number of spheres, are unable to use their knowledge and potential. 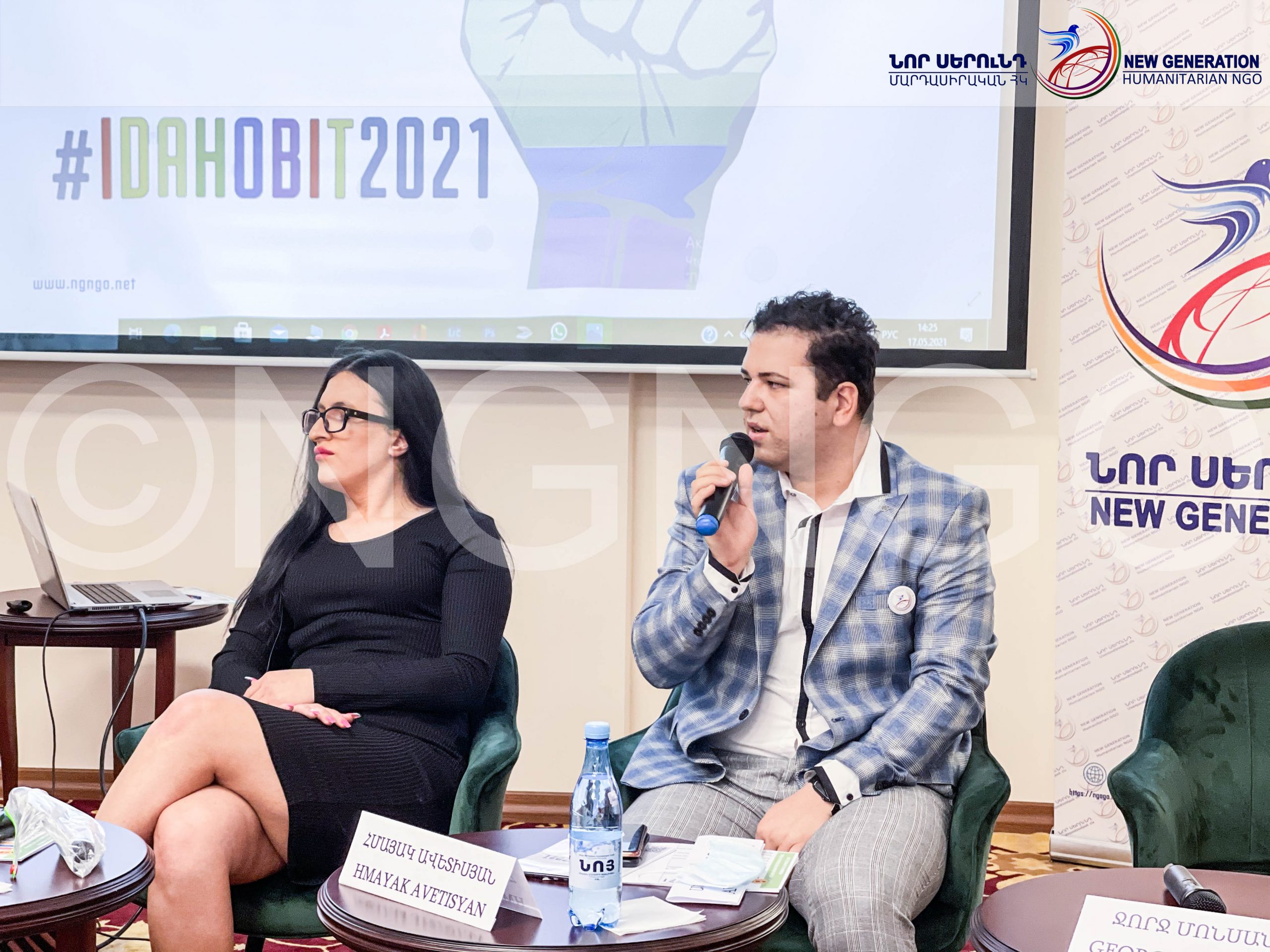 “People need to be constantly educated in the field of sexuality.

Representatives of vulnerable groups, in turn, should talk about their problems and be demanding, since the state has pledged to ensure the realization of their rights as full-fledged citizens. No one knows better about the problems of communities, issues and priorities than representatives of these communities themselves. They should actively participate in the decision-making process, and community organizations and activists should contribute to this process,” the human rights activist says.

According to Nare Hovhannisyan, the president of the Center for Legal Initiatives NGO,  December 10 is another reason to talk about human rights. On this day,  the state attention is once again focused on human rights, problems, and steps are being taken to solve those problems. According to Hovhannisyan, after the 2018 revolution in Armenia,  no intentional steps have been noticed to be taken by the state aimed at violating human rights. Speaking about human rights in penitentiary institutions, Nare says that cases of violence are still disclosed there, but they are not specifically instructed by the state. 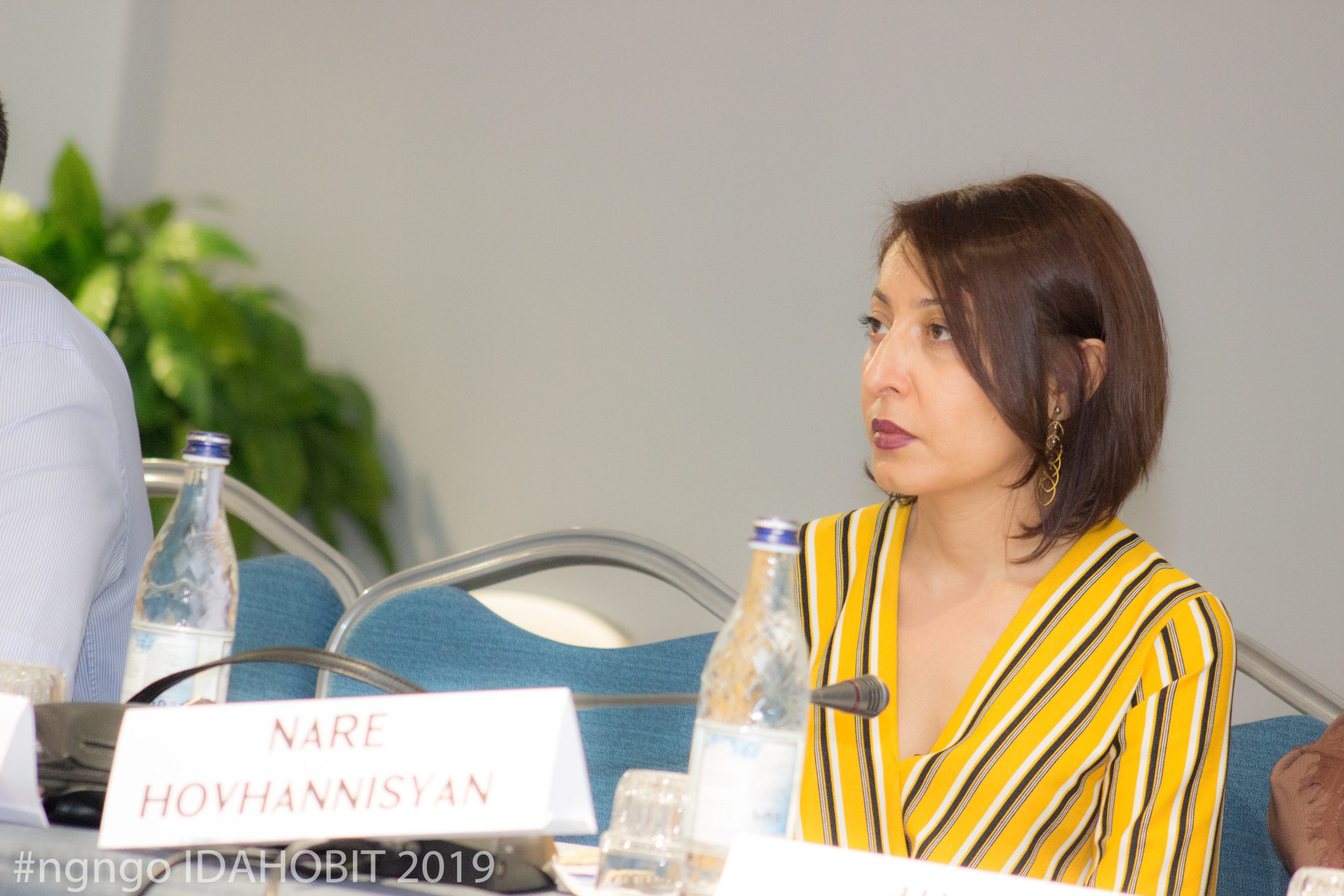 “The problem of overcrowded penitentiaries was solved, amnesty was applied, the institute of early release works though with shortcomings, the issue related to food was solved, the food supply service was transferred to a private company. We were constantly talking about this problem, and its seems the process has started. We feel the effort from the state, a positive shift is felt in the penitentiaries,”  Nare Hovhannisyan says.

Referring to the policy of re-socialization of people kept in penitentiary institutions, she said that comprehensive, practical steps are not being implemented, no incentive processes are noticed to be applied, there are no sufficient educational programs, opportunities for work.

“The nature and content of the problems has changed.

“Now you will not see deliberate tendency of oppression, humiliation, violence from the side of the state, when you enter a penitentiary while on the other hand there are not enough systems for re-socialization of people,” the human rights activist says.

The ideas of equality and non-discrimination are  the heart of human rights. The state, human rights organizations and individual human rights activists must unite their efforts for the sake of these ideas. Finding and addressing the root causes of discrimination in society, addressing the needs of vulnerable groups, including women, children, LGBTI people, migrants, people with disabilities, and others, are the key to achieving equality.

December 10 is another opportunity to prove our loyalty and devotion to these values.