“EVERYONE NEEDS TO UNDERSTAND THAT EVERY INDIVIDUAL IS ENDOWED WITH SEXUALITY”

Heredity has a great influence on a person’s sexual orientation, but there is no gene or formula that can explain it. There are also very few studies conducted so far that clearly represent the reasons how sexual orientation is formed.

Sexual orientation is often confused with sexual relationships, which is an obvious mistake. Before talking about the biological basis of sexual orientation, it is important to understand what it is.

Sexual orientation, like a person’s musical skills or good drawing, may have a biological basis on which it is conditioned.

Sexual orientation is the integrity of each person’s deep emotional and sexual attractions towards other people.

Some studies allow scientists to say that sexual orientation is caused by a complex interaction of genetic, hormonal and environmental factors.

The conducted studies, family studies and genetic analysis allow us to evaluate the introduction of a biological component and try to figure out how ” biology ” can have an effect on behavior.

-What can have effects on sexual orientation? Can you name the reasons?

Too often, when people hear the term sexuality, they associate it with sex or having sexual life, but they are not the same thing. Sexuality is one of the most important components of personality, a natural, healthy and integral part of life, feelings for oneself and for the bodies of others, emotional and emotional connection with someone, attractiveness, identification of a person of any gender, the name given at the time of birth, childhood toys and roles, sex education․․․

Everyone needs to understand that every individual is endowed with sexuality. Sexual orientation is one of the components of sexuality and is also characteristic of every person.

– Homosexuality is often considered a mental illness, with the help of various therapies they try to make people heterosexual, in your opinion, will this mentality disappear over time?

First of all, it is specialists who should become the priority link that can influence the formation of public opinion. The point is that professionals are often afraid to speak out about LGBTI people, fearing that they will be targeted and subjected to associated discrimination.

In parallel with reduction of stigma and discrimination, many people will start talking, the community will speak with a more open face, and people will see that LGBT people are the same as others, have values, are good specialists in their fields and live a usual life.

– What steps are being taken by New Generation Humanitarian NGO to raise awareness of people on this topic?

Our organization carries out a continuous process of human rights protection of LGBT people and advocacy. Courses and trainings are held both among LGBT people and representatives of government agencies, police, penal institutions, medical workers on sexual intercourse, human rights, prevention of stigma and discrimination. We also inform health workers about the international classification of diseases of the World Health Organization. We film social ads, films about the lives and successes of LGBT people.

“I have overcome all kinds of fears for a long time and now I help and support many people like me to accept themselves”.

The biggest “slap in the face” around the topic of sexual orientation is received by representatives of the LGBT community, a lot of myths revolve around them, they often become a target, relatives and family members try to “correct” them, assuring that they made a mistake, and it’s a matter of time.

There are cases when members of the community are forced to marry against their will or turn away from them, often not realizing that the biological basis of sexual orientation plays a decisive role in formation of orientation, but not the desires and choices of individuals.

To raise the issue, we talked with 2 representatives of the LGBT community in Armenia, the name of both has been changed.

According to Aram, a representative of the community, he often witnesses conversations in which LGBT people are accused of their sexual orientation, considering it a mental illness. “First of all, I feel pain, especially when this conversation happens in my presence.  Not in all cases but I try to talk to these people, explain that homosexuality is not a mental illness, not a choice, but when I understand that people are ready to listen to the truth, discuss the issue, I give reliable arguments that can be convincing to people,” says Aram.

He has come a long way to accept himself, during which he managed to familiarize himself with many sources on sexual orientation. “At first I thought that what was happening to me was a sin, the result of bad upbringing, and I always hoped that God would heal me one day, but then I realized that God does not interfere because everything is fine with me,” he notes.

When asked if it is not difficult to be part of a sexual minority in a society where danger can threaten at every step, Aram replied that although Armenia is not one of the safest countries for LGBT people, the situation is improving here too. “I have overcome all kinds of fears in myself for a long time and now I readily help and support many people like me to accept them, overcome fears and be happy,” Aram concludes. 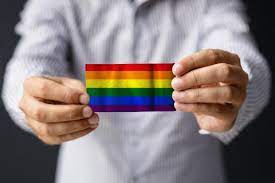 According to another representative of the LGBT community, Vahe, it is strange that there are still people who can consider homosexuality a mental deviation. He says that whenever possible he tries to explain to people, inform them, increase their sensitivity to the topic. He, like Aram, notes that the social environment cannot affect a person’s sexual orientation, since it is not an inclusive and formable feature in the personality. “Many also make the claim that sexual orientation is a choice. It cannot be a conscious choice of a person as it is not accepted, it’s stigmatized, for which people are denied, marginalized, because of which people cannot enjoy all the freedoms that others can,” says Vahe.

Although the biological basis of sexual orientation has not been fully studied and there are no clear claims how it is formed, however, the available information allows to note that it is not a human choice over the years. Anyway, research on the topic continue.