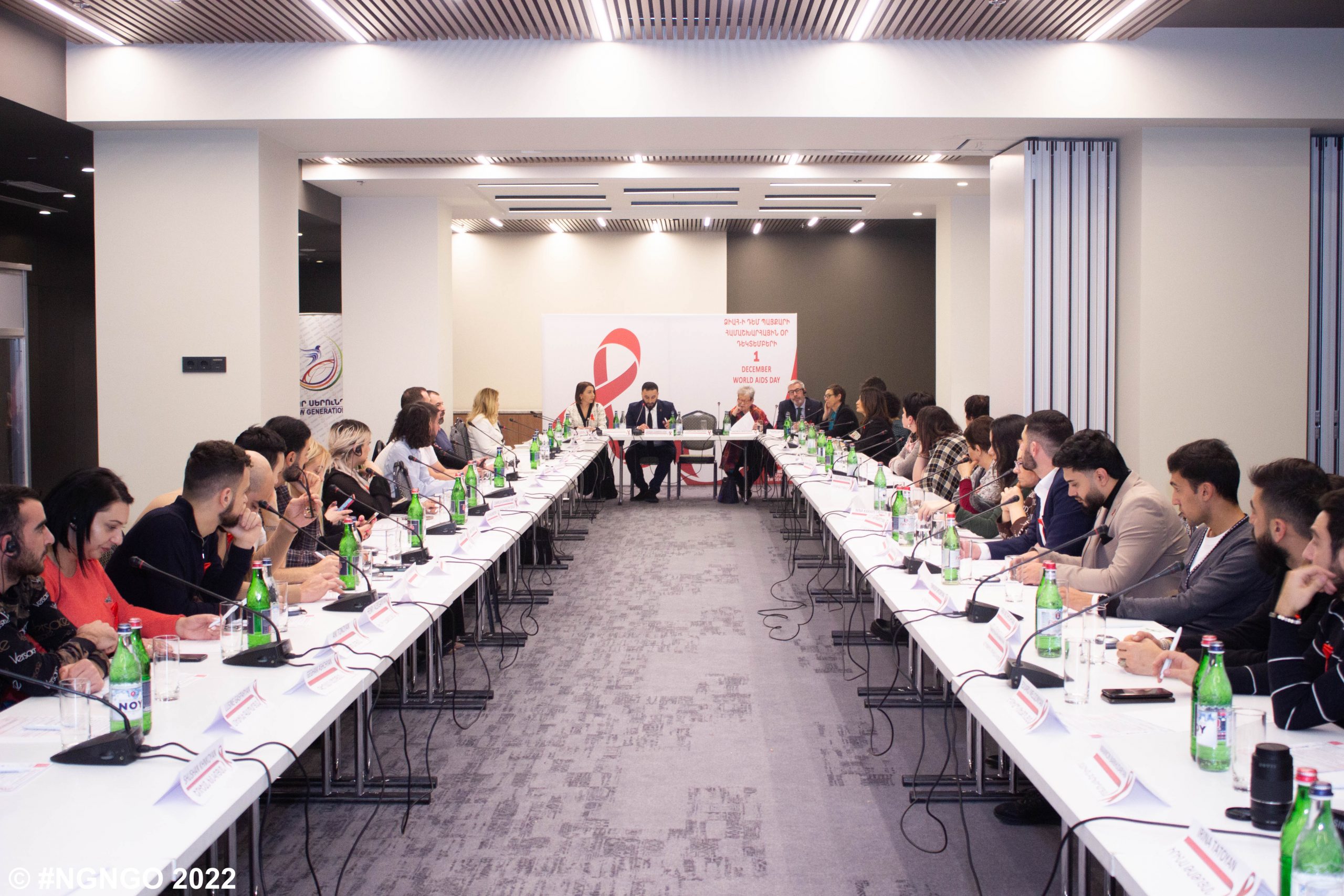 Every year, on 1 December, the world commemorates World AIDS Day. The day was proclaimed in 1988 to raise the awareness about AIDS epidemics that originated through the spreading of HIV infection. 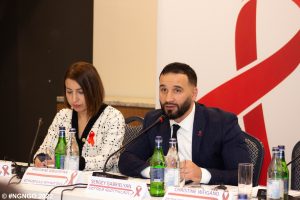 Each year on this day New Generation Humanitarian NGO organizes different events to mark the day, to show support to people living with and affected by HIV, to highlight the importance of HIV and AIDS prevention, to draw the attention of the international community, state bodies and the general society on the issues and problems in the field, the implemented actions, registered progress and still existing gaps. 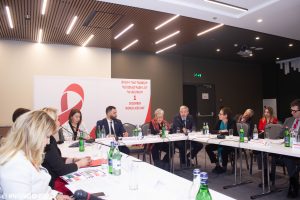 The meeting united all stakeholder bodies around a table to discuss the HIV and AIDS situation in Armenia, the progress and achievements in the field, still existing problems, steps and interventions undertaken on the response to HIV, implemented actions and programs aimed at HIV Prevention, necessary changes and future steps.

The meeting-discussion was launched with the opening remarks of Sergey Gabrielyan, president of New Generation Humanitarian NGO who thanked all the guests for participation, highlighting the established close cooperation among state, international and local organizations in the effective fight against HIV and AIDS in Armenia, as well as the importance of ensuring the sustainability of HIV and AIDS prevention programs among key populations in the country and the need to mention not only the registered results and achievements but also the existing problems and gaps in the field. 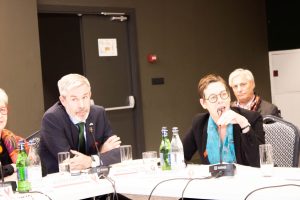 H.E. Andrea Wiktorin, Ambassador, Head of the Delegation of the European Union to Armenia, H.E.M. Anne Louyot, Ambassador Extraordinary and Plenipotentiary of the French Republic to Armenia; H.E.Mr. Patrik Svensson, Ambassador Extraordinary and Plenipotentiary of Sweden to the Republic of Armenia; Kristinne Grigoryan, Human Rights Defender of Armenia, representatives of the Ministry of Health; Global Fund Coordination Team, Coordinating Mechanism against HIV/AIDS, Tuberculosis and Malaria of the Republic of Armenia (CCM),  WHO office in Armenia, National Center for Infectious Diseases, international and local organizations, medical institutions and other stakeholder bodies attended the meeting. 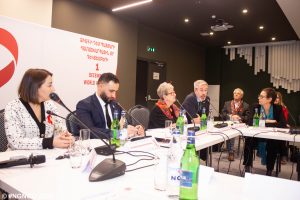 After opening remarks, NGNGO president Sergey Gabrielyan gave the floor to Kristinne Grigoryan, Human Rights Defender of Armenia. The latter also noted the importance of speaking up about the problems and issues in the field of response to HIV and AIDS in Armenia and placing joint efforts for their solution.

Next, H.E. Andrea Wiktorin, Ambassador, Head of the Delegation of the European Union to Armenia, H.E.M. Anne Louyot, Ambassador Extraordinary and Plenipotentiary of the French Republic to Armenia; H.E.Mr. Patrik Svensson, Ambassador Extraordinary and Plenipotentiary of Sweden to the Republic of Armenia; Paul Morris, Deputy Head of British Embassy to Armenia Naira Sergeeva, Global Fund Program Coordination Team Monitoring and Evaluation Specialist of Ministry of Health of the Republic of Armenia, Roza Babayan, UNAIDS Country Manager, Gayane Ghukasyan, WHO office in Armenia, Country programme coordinator for communicable diseases, Greta Harutyunyan, CCM representative made welcoming speeches. They all highlighted the importance of cooperation of state, international and civil society organizations and their joint efforts in fighting inequalities, discrimination, stereotypes and prejudices  for effective response to HIV and AIDS, and other pandemics, making a special reference to the year’s theme “Equalize”. 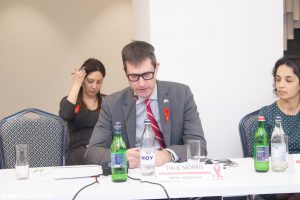 H.E. Andrea Wiktorin particularly mentioned that it is important to equalize the access to services through prevention, explaining, showing empathy. Honourable Ambassador also noted that among the most important factors of eliminating obstacles to the services is the education in schools, responsible media, and awareness raising of healthcare workers. Her Еxcellency concluded her speech with a call for uniting. “Let’s together show that we’re united in this fight, as luckily AIDS can be treated now!”

H.E. Ambassadors Ann Louyot and Patrik Svensson spoke about the progress and achievements their countries have registered in the field of the fight against HIV and AIDS, mentioning, however, that HIV is still an important health issue, and the latter expressed the commitment of their missions to share their experience and support to the response to HIV and AIDS and achieving 90-90-90 in Armenia. 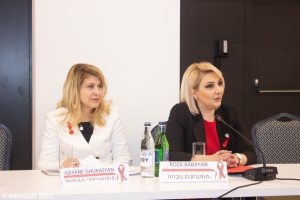 H.E.Mr. Patrik Svensson also noted the importance of protecting the rights of vulnerable groups, i.e. LGBTQI rights, breaking the stereotypes and discrimination in the fight against AIDS. 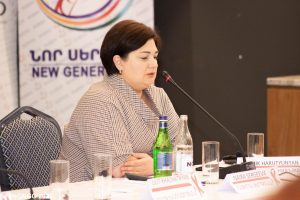 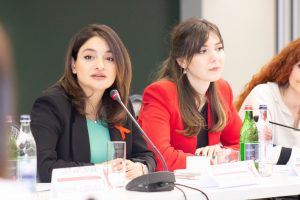 After the presentation of HIV Prevention Programs, Marietta Mirzoyan, Head of Monitoring and Evaluation Department of the National Center for Infectious Diseases of the Ministry of Health of the Republic of Armenia, presented the Survey on the HIV epidemic situation among key populations of HIV, AIDS Prevention Strategic Program. 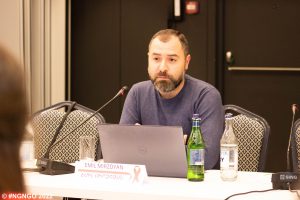 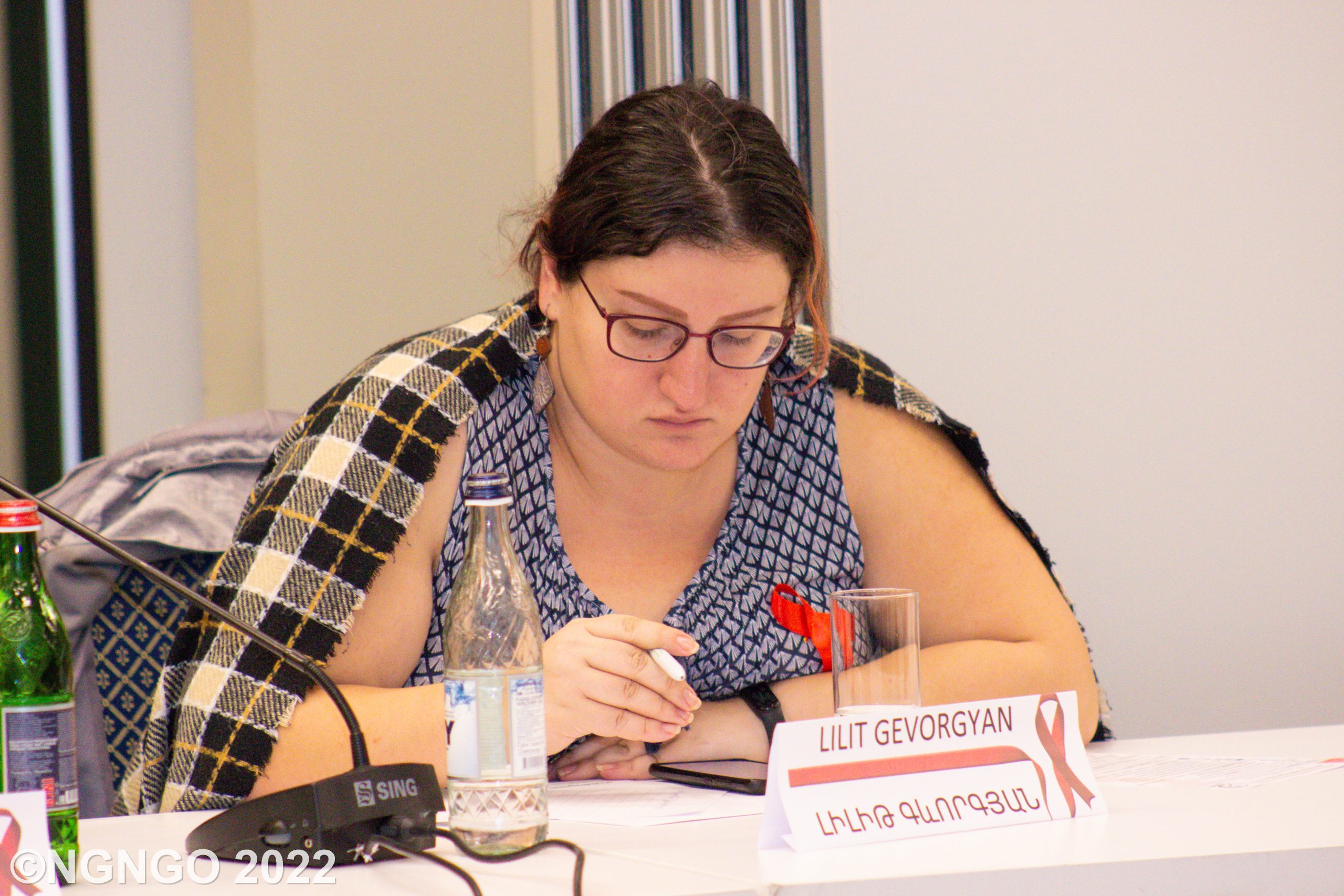 economic and social consequences of pandemics, particularly COVID-19, on key populations, developed within the project on Response to Consequences of Pandemics on Key Populations, implemented with the financial support of the European Commission in the framework of the “Eastern Partnership – COVID-19 Solidarity Programme”. The peresentation was proceeded with the feedback of the attendees on the strategy, and discussion  for possible ways of the strategy integration in state and international programs on the response to pandemics consequences.

Sergey Gabrielyan concluded the meeting thanking the guests for participation and active discussions. The NGNGO president particularly thanked the participants for actively speaking up about the problems existing the field of response to HIV and AIDS, and he also once again highlighted the importance of established cooperation among diplomatic missions, state bodies, international and local organizations, medical institutions, and all other stakeholders in the effective fight against HIV and AIDS.

The meeting-discussion was organized within the framework of the Right to Health of Community project implemented with the financial support of Gilead Sciences.