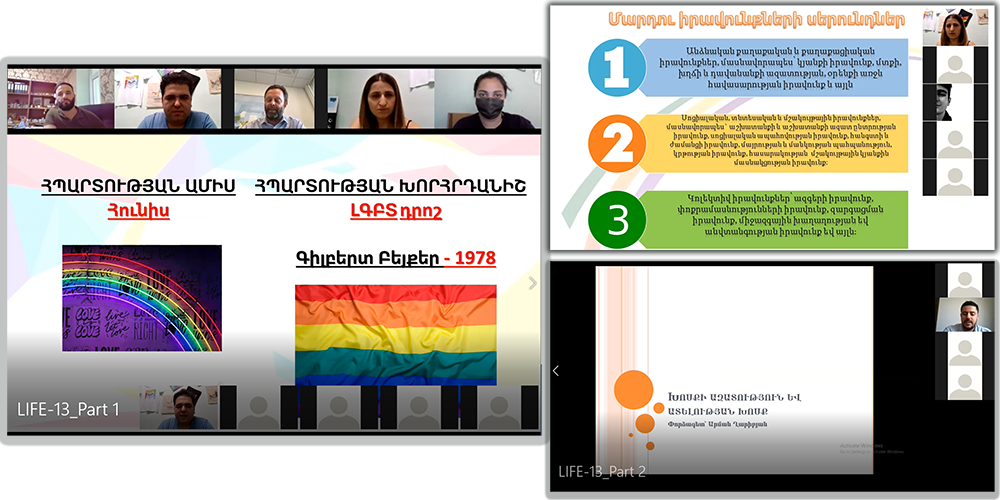 The goal of LIFE-13 Information Platform is to raise the awareness and build the capacities of LGBT community representatives on Leadership, Human Rights and Non-discrimination, enhance their legal consciousness, acquaint them with the domestic and international human rights protection mechanisms .

H.E.M. Birger Karlsson, Minister Counsellor, Charge d’Affaires of the Embassy of Sweden to Armenia,  joined the online information platform and delivered a welcoming speech. In his speech, the Minister-Counselor spoke about the importance and their readiness of their support of the protection of the human rights of LGBT people in Armenia. H.E.M. Karlsson also mentioned about the cooperation between the Embassy and  New Generation Humanitarian NGO, informed the participants about the opportunities of shelter, legal assistance and other services provided within the framework of Fighting Against Discrimination project implemented by New Generation Humanitarian NGO with support of Sweden.

Mr. Sergey Gabrielyan, President of New Generation Humanitarian NGO also welcomed the participants and  congratulated the participants on the day of the creation of the rainbow flag, the symbol of LGBT pride, and waved the flag in front of the camera wishing them productive and interesting sessions.

The day continued with the topic of Domestic and International Mechanisms of Human Rights Protection, ECHR, which was presented by lawyer, trainer Shushan Khnkoyan. She introduced the concept of human rights, generations of human rights, domestic and international protection mechanisms. At the end of the training, the European Convention on Human Rights and the procedure for applying to the ECHR were presented.

The second day of the information platform was dedicated to legal topics. Experts Arman Gharibyan, Anahit Mkrtchyan and Ara Gharagyozyan presented Freedom of Speech vs Hate Speech, Prevention of Stigma and Discrimination and Torture.

The participants were also introduced to the ECHR definition of Torture, differences between torture and bad treatment according to ECHR, specificities of investigation of cases of torture within the topic of Prevention of Torture.

“Fighting Against Discrimination in Armenia” project is implemented by New Generation Humanitarian NGO with financial support of Sweden.