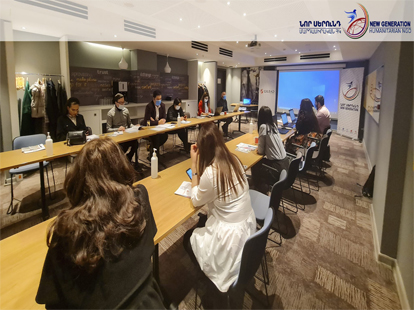 HIV is not a verdict․ Round-table discussion was held.

A round-table discussion entitled Application of HIV Prevention Methods in Armenia was held on March 26, 2021 by New Generation Humanitarian NGO.

Representatives of the Ministry of Health of the Republic of Armenia, the National Center for Infectious Diseases of Ministry of Health, local non-governmental organizations, as well as community-based NGOs and community attended the meeting.

At the beginning of the meeting, New Generation Humanitarian NGO president Sergey Gabrielyan made an opening speech, greeted the attendees and wished a productive discussion.

Then the speaker presented the Advocacy Roadmap for addressing the funding gaps of social and health services provided to MSM and trans* people identified in the  national budget of the Republic of Armenia which was developed within the grant issued by Eurasian Harm Reduction Association (EHRA) as a part of the Eurasian Regional Consortium, funded by the Robert Carr Fund for civil society networks (RCF).

Lawyer Lusine Gasparyan presented the report of the comparative analysis of PrEP and PEP protocols of Armenia, their correspondence with the international requirements and standards.

After presentation of the reports, pre-exposure and post-exposure prophylaxis methods of HIV prevention, financing, age restrictions and possible side effects were also discussed during the meeting. The participants gave questions to the experts and received exhaustive answers.

The representative of the Ministry of Health mentioned that the Ministry is working towards the improvement of the raised issues and there is also some progress registered in the field.

Also the gap of awareness about pre-exposure and post-exposure prophylaxis methods of HIV was touched upon during the discussion. New Generation Humanitarian NGO presented its work aimed at filling up this gap: informative-educational booklets were printed and disseminated among the beneficiaries, awareness raising social videos were filmed. The videos were also screened at the end of the meeting.

New Generation Humanitarian NGO has been a source of awareness about HIV, its pre-exposure and post-exposure prophylaxes sources for many years, trying to raise the level of awareness among the most vulnerable people.

This meeting was also the refelction of the goals of the NGO.

At the end of the meeting, the participants thanked each other for the cooperation, reached an agreement to jointly work for further developments.

The meeting-discussion was organized by New Generation Humanitarian NGO within the framework of Awareness Raising and Advocacy to Ensure the Right to Health for Vulnerable Groups of the Society project with financial support of Gilead Sciences Inc.