On January 21, 2022, New Generation Humanitarian NGO provided the fourth sub-grant aimed at the promotion of human rights of LGBTI People, non-discrimination and equality within the framework of Sensitization and Empowerment for Equality project. 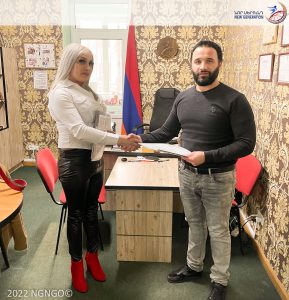 This sub-grant was provided to National Trans Coalition human rights NGO to implement Increasing the visibility of trans* people through a multilateral collaboration platform project.

The aim of the project is to increase the visibility of trans* people among the groups of society providing basic social services.

During the project, a dialogue platform will be implemented between trans* lawyers, newly established NGO and mass media representatives which will contribute to the strengthening of trans* specific knowledge and trans* visibility among the latter.

We congratulate National Trans Coalition human rights NGO with confidence for successful implementation of their project goals and productive cooperation for protection of human rights of LGBTI people, elimination of discrimination and establishment of equality in Armenia.

This sub-grant was provided by New Generation Humanitarian NGO and was funded through a Department of State Public Affairs Section grant.