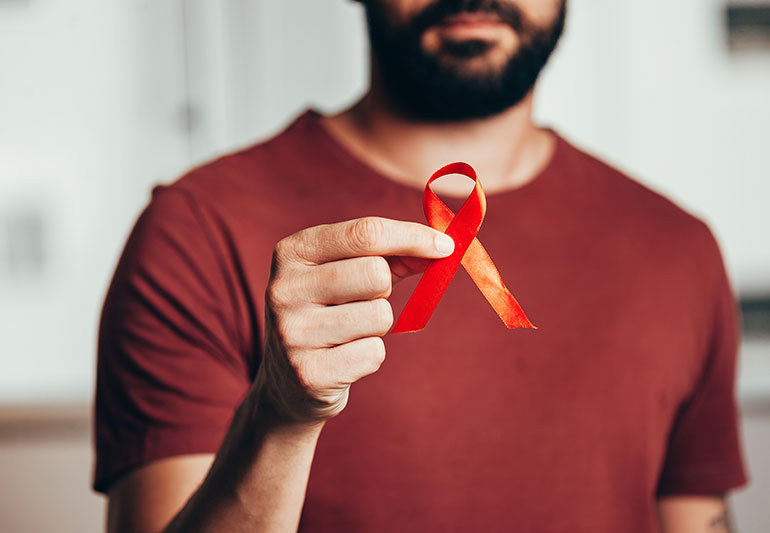 HIV or human immunodeficiency virus is one of the most discussed viruses in the world today. It was first recorded in 1981, and already in 1983 the trigger of the infection and later its various clinical forms were discovered. The first HIV case in Armenia was registered in 1988.

Making up only 6% of the HIV prevalence in Armenia, members of the LGBTI community bear the greatest responsibility for the spread of the virus and face stigma and discrimination. “LGBTI people in Armenia are one of the most discriminated groups, whom the society, for some reason, often considers the cause of all its problems and misfortunes. And since there is also quite a large discriminatory and cautious attitude towards people living with HIV in society, surely LGBT people living with HIV face double discrimination, even accusations and condemnation, since it is often being an LGBT person is considered to be the cause of HIV infection or even responsible for staring of HIV infection without any reasonable justification”,- says Alina Mirzoyan, human rights and advocacy coordinator of New Generation Humanitarian NGO  (NGNGO).

In this context, it is important to note that LGBTI people living with HIV are treated badly not only by society, their environment or family, but also, even worse, by governmental bodies, and in medical institutions – by doctors. Lawyer Lusine Gasparyan thinks that the Republic of Armenia needs to introduce effective mechanisms of legal protection in the domestic legislation. “Article 29 of the RA Constitution establishes a ban on discrimination, but does not provide the necessary mechanisms for carrying out sufficient human rights activities, it is also problematic that the RA legislation does not have a separate independent law Anti-discrimination law, which is also a serious obstacle to the implementation of human rights activities.

There is a medical secrecy provision in the current national legislation which stipulates that medical care providers are criminally liable for disclosing information about a person’s illness or the results of a medical examination, but this has almost no practical application. The publication of medical confidentiality itself encourages the manifestation of discrimination against other persons in almost all spheres, other violations, in particular, the violations of the right to work, the right to health, the right to education.

This is a consequence of the low level of legal awareness, as social stereotypes play a big role, even the doctors in the field do not have a general knowledge about the infection, their rights and responsibilities. It turns out to be a sad reality that the mentioned mechanisms of protection of rights are defined by the RA legislation, however, people living with HIV are not able to fully protect their rights due to the low level of awareness and legislative gaps. It is very important to develop effective mechanisms aimed at raising the level of public awareness and consciousness, as well as the regular targeted training for doctors in the field,” she says.

The rights of LGBTI people living with HIV, the preventive measures taken among the latter, the awareness campaigns in Armenia are carried out mainly at the expense of international organizations and funds, in cooperation with non-governmental organizations with experience in the field ․ “The Government of the Republic of Armenia delegates the implementation of HIV prevention programs among vulnerable groups to NGOs with experience working with those groups, as only those organizations that are well aware of the needs, problems, challenges and achievements of the communities can provide coverage. It is another matter whether this practice will continue after the transition phase of HIV prevention programs in Armenia, when funding is provided exclusively from the state,” stated Hmayak Avetisyan, a member of The Country Coordinating Mechanism against HIV/AIDs, Tuberculosis and Malaria of the Republic of Armenia and HIV activist.

NGOs, in turn, support the state in the implementation of HIV prevention programs, thus raising the needs of their stakeholders, raising the rights of the latter, the issues related to their violations, while strengthening the state’s capacity to implement such programs.

“NGNGO has been carrying out human rights activities for about 20 years, mostly working with vulnerable groups of society. The organization has been implementing HIV prevention programs since 2003 in support of the implementation of the state program on HIV/AIDS prevention in the Republic of Armenia. The organization is currently implementing Prevention of HIV among MSM, CSW and TG, which is funded by the RA Ministry of Health from the funds of the Global Fund to Fight AIDS, Tuberculosis and Malaria in cooperation with the National Center for Infectious Diseases․ Since April 2021, our organization implements The Right to Health of Community project with the financial support of GILEAD organization, within the framework of which from 2022 it is planned to provide PrEP annually to 10 beneficiaries, the format of which we plan to discuss and agree with the NCID of RA Ministry of Health. HIV awareness raising activities are also being carried out,” says NGO President Sergey Gabrielyan.

Today, as the world focuses on the COVID-19 epidemic, which is no less urgent, it is important not to weaken vigilance, to make efforts to raise awareness about HIV, to use possible measures to prevent the spread of the virus, to increase their effectiveness, and to raise public awareness on HIV to eliminate its perception as a verdict.